Of course not; the Olympian gods and the Sith inhabit different universes.

The Greeks worshipped Zeus under many appellations, each denoting a different aspect of his character. As Zeus Hypatus, he was the father of gods and men and ruler of the world. As Polieus, he was the protector of the polis (the city). As Soter he protected the home. As Meilichius he heard people’s prayers and granted prosperity. As Xenios, he protected the strangers, the poor and the supplicants. Yet never and nowhere did he bear the appellation of Sith.

Yet the word sith can clearly be read on the inscription (and has not been photoshopped). In that case, what can its meaning be? 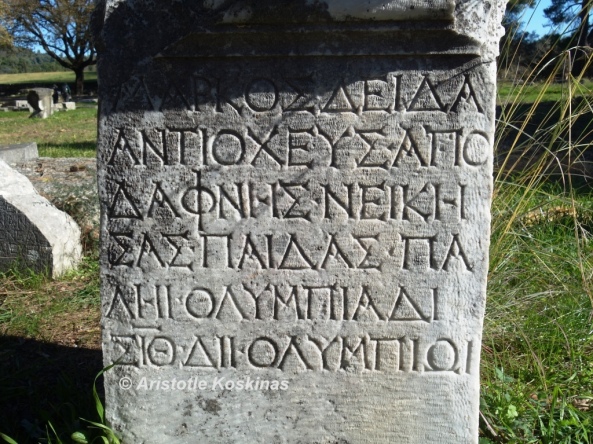 Inscription on a statue base. Olympia, Greece, 1st century CE.

Let us examine the text line by line:

Which in simple English reads: Marcus, son of Deidas, from Daphne of Antioch, having won in junior’s wrestling during the Sith Olympiad, [dedicates this statue to the] Olympian Zeus.

The word Sith is made up of three characters: Sigma, Iota, Theta. These characters make up not a word, but a number. It is the number of the Olympiad during which Marcus won. Before we decipher the number, let us first take a look on the Ancient Greek numbering systems.

Sometime in the archaic / early classical period, the acrophonic system was devised in Athens. It was quite simple, as every number was denoted by its first letter. So pente (5) was denoted by a π, deka (10) by a delta (Δ), hekaton (100) by an H. Combinations of those stood for multiples of each. This system was in use until Hellenistic times.

The problem was that it was complicated, especially for writing large numbers. So by the 5th century the alphabetical system was invented, probably in Ionia (on the NW coast of Asia Minor). It soon began to replace the older system and had completely replaced it by Roman times.

This system uses the 26 letters of the ancient Greek alphabet as digits. For instance, Alpha stands for number 1, Iota stands for 10 and Rho (P) stands for 100. Thus, the number 111 would be written as PIA.

In our inscription, Sigma stands for 200, Iota for 10 and Theta for 9. This means that Marcus won during the 219th Olympiad. We know that this took place in 97 CE.

Marcus’s inscription reveals that a teen, no more than 18 years old, travelled from Antioch, Syria, all the way to the western Peloponnese, just to take part in the most ancient and famous games of antiquity. Besides giving us this glimpse into a minor episode in the long history of the Olympic Games, the inscription demonstrates the importance of these games throughout the Greek-speaking world.