The most iconic monument of Delfi is –unexpectedly– not the temple of Apollo where the famous oracle was. It is the Tholos in the sanctuary of Athena Pronaia, situated at the east end of the ancient city of Delphi; this will be today’s stop in our virtual journey through Greece.

Three restored columns supporting a small part of the entablature is all that the visitor can see today of the magnificent Tholos of Delphi.

As in Epidaurus, although the purpose of this round building is uncertain the name of its architect is known. It was Theodorus, from Phocaia of Asia Minor (modern day Foça, in Turkey) who wrote a treatise describing the building and the principles of its design.

Representation of the sanctuary of Athena Pronaia in Delphi. Source [1]

The sanctuary of Athena Pronaia in Delphi as it is today.

The Tholos of Delphi was built around 380-370 BCE and is the first of the three such buildings that were built in the late classical period. As a building, it is representative of the creativity prevalent in 4th century architecture.

The Tholos of Delphi as it is today. Source [2]

One feature found in many buildings of the period is the combination of different architectural orders. In the Tholos of Delphi, the outer colonnade comprises 20 Doric Order columns, albeit unusually tall and slender. The interior has 10 Corinthian Order ones, standing on a ledge that runs all around the chamber; these columns are “engaged”, which in architectural jargon means that they are in touch with the wall behind them.

Most of the building is made of white Pentelic marble, but the ledge of the interior columns and the floor of the cella (chamber) were made of top grade grey limestone from Eleusis; their different shades created a nice contrast between the different elements of the building.

Tholos of Delphi: representation of the interior. Source [3]

Another feature typical of 4th century buildings is their rich sculptural decoration. The Tholos of Delphi had a conical roof of marble tiles, complete with acroteria in the form of female statues, and a richly decorated sima (gutter) with lion head spouts and floral motifs.

Tholos of Delphi: representation of the exterior. Source [4]

Its metopes were made of Parian marble, both on the outside and the interior epistyles (horizontal parts above the columns). The outer metopes had scenes from mythological battles against Amazones and Centaurs; of the interior ones so little survives that their subject will probably remain a mystery.

The building’s function will also remain a mystery, despite the several theories that have been proposed. 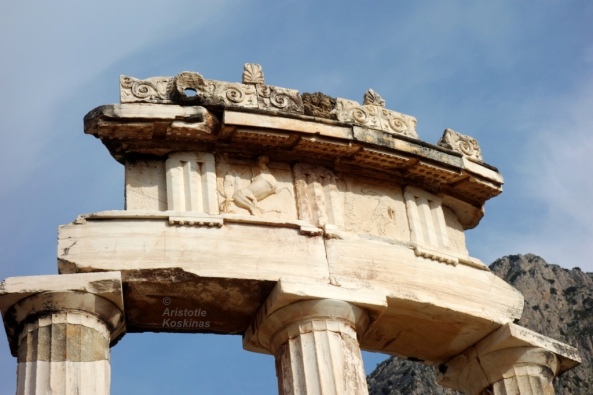 The restored fragment of the entablature that the visitor can see today. Notice the two metopes with scenes of equestrian battle (vs Amazons) and the richly decorated sima (gutter).

This remarkable building, outstanding both for its rich décor and the perfection of its design and execution, was restored in 1938 and has been standing guard of Delphi since then, priming visitors for the experience of visiting what was once called “the Navel of the World”.

[2] Picture taken (and graciously donated) by a visitor whom I had the pleasure of guiding at the site in 2010.