The Acropolis fauna comprises many species, most notable of which are the tortoises, often making an appearance among the vegetation of its Southern slope. There are also the ubiquitus pigeons, doves and sparrows. However, a new species has come to call the Acropolis its home; it is a colony of cats who are calling the rock’s northern slope their home.

Some of these stray pets often reach all the way to the top, where they become one of the archaeological site’s most alluring sights.

They can be seen at various spots of the Acropolis, on the bare rock, the broken marbles, even the buildings that are off-limits to visitors. While sitting with an air of royal self-possession, they are not above posing for their human fans, many of whom end up shooting more photos of the cats than of the monuments they traveled to see. 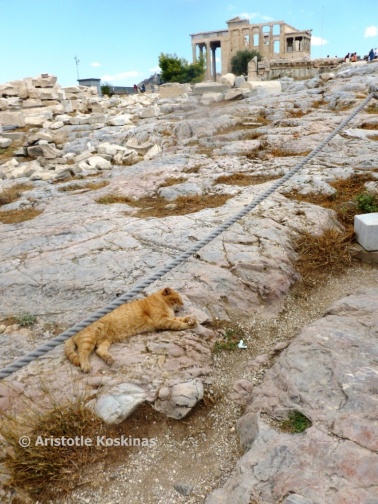 Yesterday, while on the Acropolis (again), this time with some visiting friends, we saw this a group of photographers carrying expensive professional equipment – tripods, photometres and huge telephoto lenses. In itself, the sight is nothing remarkable, as there are often professional crews on the Acropolis. What was strange was that of them all, only one had trained his camera to the Parthenon; the rest were all focusing on a cat, apathetically sitting on the other side of the rope preventing visitors from entering the temple grounds.

I wonder, is the cat going to be the star of some documentary or series featuring the Acropolis? Who knows…

What is certain is that to an Ancient Egyptian the fact that the cat monopolises the visitors’ attention would be perfectly natural. To me, on the other hand, the fact that an ephemeral living being can overshadow these monuments is completely incomprehensilbe.