Nineteen hundred years ago, a young Roman aristocrat, Publius Aelius Hadrianus, became Emperor of the Roman Empire. Heir to Emperor Trajan, he assumed the official name Caesar Traianus Hadrianus Augustus and remained in power for the next 21 years, from 117 until 138 CE.

He is considered one of the best Roman Emperors; his era was one of the best for the Empire and was generally peaceful, despite uprisings in various provinces (most notorious of which was that of Judaea). He travelled the length and breadth of his Empire, leaving in his wake new cities and other building projects, most famous of which is “Hadrian’s wall” an impressive work marking the border between Roman Britannia and Caledonia (Scotland).

Today, he is one of the better-known Roman Emperors and his name is easily recognizable. Cosmopolitan though he was, he was at heart an Athenian and was renowned for his love of Greek culture. Already before becoming emperor he had spent a year in Athens, becoming a citizen and assuming a public office.

Yet it was during his reign that he showed his support for the city, by various means, most visible of which are the impressive building projects with which he endowed the city. These works are visible to this day and form part of the city’s urban landscape. Of course these were not the only visible reminders of his presence. Statues of the Emperor were to be found in every public space. It is estimated that in the theatre of Dionysus alone there were 13 of his statues, scattered among the seats. More were to be found at the temple of Olympian Zeus, dedicated not only by the Athenians, but by many other cities of the eastern half of the Empire.

At least two of his statues stood in the Ancient Agora, one of which at the monument of the “Eponymous heroes,” the mythical forebears of the tribes into which the Athenians were divided. The statue took its place after a new tribe, the “Hadrianis,” was added to the previous ones, in honor of the Emperor.

Finally, in the Parthenon itself, the Athenians dedicated a statue of Hadrian made of ivory and gold, and placed it right next to Athena’s own.

Of all those sculptures, only a few survived and were found in excavations. For instance, the collection of the National Archaeological Museum contains 9 heads and various statue fragments, of which only two portraits are exhibited in the museum.

The first (the one you see above) is an idealized portrait of the emperor’s, dating between 117 and 130 CE. It was found near the temple of Olympian Zeus and focuses on the human facet of his persona, presenting him in the manner a philosopher or poet might be portrayed.

The second is a head which would have belonged to an imposing statue presenting the emperor in a cuirass, to emphasise his power and military prowess. He is shown crowned with an elaborate wreath of oak leaves and bearing a distinct frown. The head, also from the collection of the National Archaeological Museum, is now on temporary loan to the New Acropolis Museum, where it is exhibited with a video backdrop of the buildings he bequeathed Athens with. It was found near Syngrou Avenue, not far from the previous one and it is remarkable that the two statues, presenting such different facets of his public image, coexisted in roughly the same area.

Another portrait, in relatively good condition, was found in the city’s Roman Forum and is now in Hadrian’s Library.

Statues of Hadrian have been discovered in nearby Piraeus. The city’s Archaeological Museum houses a statue’s head which belongs to the same cuirass-clad type as the one in the New Acropolis Museum. It was found in the city’s harbour and bears significant damage from marine organisms. 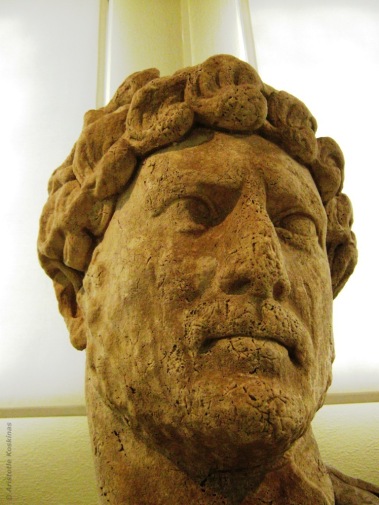 Every Roman city had several statues of the current emperor. Athens is exceptional in having too many of Hadrian’s, which is reasonable if one considers that not only he was a great benefactor of the city (in many ways) but that Athens and Athenian culture were central to the emperor’s policies and public image.

Note: It’s been pointed out to me that at 41, the new emperor was hardly young. Well, I beg to differ…