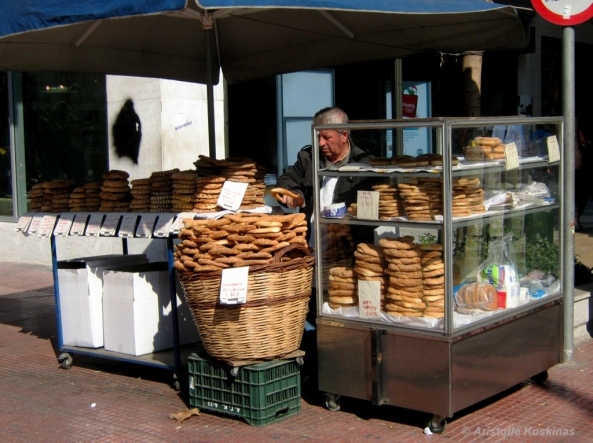 What are those bagel-like things that people eat? There are piles of them sold at every corner and every Greek seems to munch at one while briskly walking to work.

They are not bagels. They are called koulouria (singular: koulouri; you may hear it pronounced in Forvo).

A koulouri is essentially a bread ring. It is made with ordinary bread dough to which a little sugar has been added. It is liberally sprinkled with toasted sesame seeds and baked just like ordinary bread.

Although it can be found at every bakery, koulouri is usually bought in the street, from the countless vendors and stalls found everywhere.

Koulouri is at its best when eaten fresh from the oven; the crust is crunchy and the inside is deliciously soft and warm. Even after it has cooled, koulouri makes a nice quick snack at every hour of the day, consumed by young and old alike.

This truly Spartan snack is simplicity at its best; koulouri does not need to be stuffed, or topped with anything. However, if you are so inclined, you may dip it in your morning milk, tea or coffee. You may also use it to scoop up thick Greek yogurt or split it to make a sandwich.

Koulouri is filling, has hardly any fat, is lent-appropriate and vegan and costs about half a euro. It comes as no surprise that it is probably the most popular breakfast-on-the-go among Greeks (most of whom never wake up early enough for a proper breakfast).

Traditionally, koulouri was a treat made of white flour, a rare and prized luxury in my grandparents’ time. For ages the only type available was the lean and crunchy one. Then the braided, fluffy version appeared, which was soon followed by others until we had whole-wheat, mixed grains, with raisins, with cheese, stuffed with chocolate, and many more.

Today we’re spoilt for choice – take your pick and enjoy!

PS. Koulouri is also popular in our next-door neighbor, Turkey, where it is called simit. Besides the name, I know of no other difference between the two.