A century ago, on April 25th, 1915, the Allied forces of the Entente disembarked at the Gallipoli peninsula[1]. Their aim was to take over the Ottoman forts that controlled the straits of the Dardanelles and prevented the British navy from sweeping the heavily mined waters. Once the straits were cleared, the Allied ships would proceed to Constantinople where their presence (or gunboat diplomacy, if you will) would force the Sultan to surrender and the Ottoman Empire[2] would exit the war, to the great relief of the Allies.

However, things did not go exactly according to plan. The campaign, far from achieving its objectives rapidly, as planned, merely created another front where hundreds of thousands experienced the nightmare of trench warfare for 9 months, and tens of thousands died[3]. (The long and bitter fighting left a rich archaeological record in the area, which has been recently studied.) 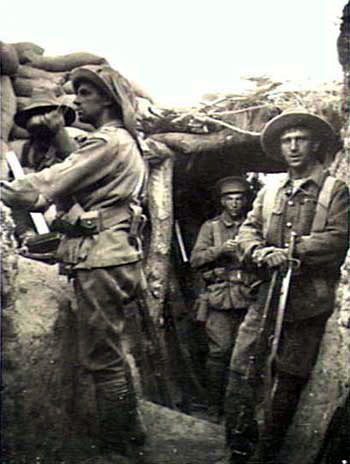 ANZAC soldiers in a trench at Gallipoli. From here.

Finally, at the end of the year, the decision to fall back was taken – the covert evacuation of all the allied troops from the peninsula was indisputably the most successful part of the whole Gallipoli campaign.

Why did it fail?

But what were the reasons for the campaign’s abject failure, despite the brave efforts and self-sacrifice of the allied combatants?

One of the reasons was that the Ottomans had been forewarned: in an earlier foray in the region, the Allied navy had bombarded the outer batteries lining the straits. Then, on March 18th, 1915, the Allies attempted to sail up the straits to Istanbul and failed; to this day, March 18th is the Turkish Gallipoli day, celebrated by the successor of the Ottoman Empire as a great victory.

There was nothing else for the Allies to do but attempt to storm the Ottoman batteries by land. Plans were drawn up, and here lies a second reason for the failure, because these were made hastily, based on faulty information about the Ottoman defences and imprecise maps. For instance, the ANZACs were landed on the wrong beach, and failed to reach the day’s objectives due to the high ridges right in front of them.

Anzac troops on the beach at Gallipoli. Alexander Turnbull Library. From here.

Supplies were a problem, especially water, in the hot Mediterranean summer. Together with food and munitions, it had to be ferried from the islands of Imvros or Lemnos. The latter, at a distance of 80 miles, had the nearest friendly port, Moudros, where an allied hospital had been set up. In order to reach the soldiers, transports had to survive constant attacks from German submarines and Ottoman guns. Not all succeeded.

Of course, the allied troops might still have made it, were it not for the determined resistance of the Ottoman army, under the competent leadership of lieutenant colonel Mustafa Kemal (later known as Atatürk, president of Turkey and a national hero for the Turks to this day).

The failure of the allies was a stunning defeat which failed to remove the Ottoman Empire from the war. It also was a serious setback in the career of the man who had conceived and backed the plan, Sir Winston Churchill, First Lord of the Admiralty of the British Empire.

What few people know is that he was not the first to have considered of taking Gallipoli by land. Two years before, the General Staff of the Greek armed forces had conceived of the same plan; the aim was to put an end to Ottoman aggression in the Aegean, a problem since the Empire had lost the Aegean islands to Greece during the Balkan Wars.

Other plans had been proposed too, but a surprise attack at the Dardanelles followed by the sailing of the Greek fleet to Istanbul had been chosen as the best alternative. The Greeks were hoping to achieve single-handed what the Allied forces would prove unable to do two years later. The plan even gained the approval of both the Greek King Konstantinos and Prime Minister E. Venizelos, who otherwise agreed on very little. Preparations were made, ships acquired and the plan kept being updated until the Allied operation.

A coincidence of plans was not the only thing that linked Greece to the Gallipoli campaign. Months before the landing, the British had proposed to the Greeks (who had still not entered the war) that the Greek forces take part in their operation against the Dardanelles, offering in exchange territorial concessions. After acquiring control of the straits, the British and Greek navy would jointly sail up to Istanbul and force the Ottoman government to surrender. The allies also wanted the use of Greek ports as bases and the help of the newly acquired Greek destroyers in escorting their transports, as their own destroyers were spread too thin.

The Greek prime minister, E. Venizelos, was eager to commit Greece on the side of the Entente, and telegraphed Churchill promising to send 3 Greek divisions to Gallipoli. However, when he asked the Greek Chief of Staff, I. Metaxas, for a plan of operations, the latter refused[4] because, as he explained to Cunninghame, the British military attaché in Athens: “The scheme [the Gallipoli campaign] in his opinion was impossible if it did not succeed as a coup de main; the impossibility of manoeuvre would hold it up, and it would then become a drain upon Greece which would eventually result in important detachments being required, which they could not afford. He was strong in his opinion that once the Turks had mobilised the project offered every danger and little prospect of success”[5].

It is striking that in these few words Metaxas summarised the outcome of the Gallipoli Campaign months before it had even begun. It is unknown whether his accurate predictions were the result of the Greek military having better intelligence on both the lay of the land and the Ottoman preparations, that the British failed to acquire (as has been suggested).[6]

Ioannis Metaxas and other Greek officers in 1913. I. Metaxas is second from the left. From here.

Further obstacles to an agreement were the German sympathies of the Greek King, a host of thorny strategic and political considerations, and the fear that an active Greek involvement would result in Ottoman reprisals against Greek-speaking populations within the Empire (as had happened in the past).Thus the negotiations failed, demonstrating once more the notorious differences of opinion between the Greek King and his Prime Minister. Greece’s participation to the offensive was thus limited to conceding the port of Moudros for use by the allied forces. Another result was the resignation of the Greek Prime Minister over this matter, which divided Greeks on two sides, royalists and democrats; years later, this division would have disastrous consequences for the country.

The Greek PM, E. Venizelos (left) with Greek King Constantinos, during the Balkan Wars. From here.

Greece may not have taken an active part in the Gallipoli campaign, but its traces are still visible in the land. The most notable are the allied cemeteries of Moudros and Portianou, on the island of Lemnos, and the British cemetery of Syros.

The allied cemetery of Portianou, in Lemnos, Greece. From here.

The British Cemetery of Syros. From here.

The Aegean near the Gallipoli peninsula. In the middle, the island of Imvros (now Turkish) and the Greek island of Lemnos, with its two allied cemeteries. You may explore this Google map here.

[1] So named after the city of Kallipolis (meaning beautiful city in Greek), founded there in the 5th century BCE.

[2] Much like the British Empire, the Ottoman Empire was a multinational one. However, its ruling class was predominantly Turkish, leading to confusion, as Ottomans were often referred as Turks. It would be the same mistake as calling British troops (made up of various nationalities) collectively as English. In Gallipoli, the Ottoman troops consisted mostly of Turkish and Arab conscripts. After the Ottoman Empire was dismantled, its core became what is now known as Turkey (equivalent to the UK after the dismantling of the British Empire).

[3] The figures are uncertain and fiercely disputed. You can see some estimates here, here and here.