Admired for its marvelous acoustics, the theatre of Epidaurus takes full advantage of the site: the sloping hill accomodates the rows of seats, while on the opposite side, the valley serves as a magnificent backdrop.

The round area in the middle is the Orchestra, where poems recited their works or musicians competed. During plays, it was here that the chorus sang and danced to music composed specifically for each play. The foundations on the left are the remains of the scene, the elevated platform reserved for actors, behind which changing and storage rooms were located. Probably a later addition, it featured painted sets and several mechanisms for special effects (such as a crane for elevating actors playing deities, and more). No trace of such mechanisms has survived – our only source of information about them is descriptions in ancient texts.

The theatre’s geometry, dimensions and stepped rows of seats have the effect of enhancing the frequencies of the human voice while filtering out sounds of other, undesirable frequencies, such as low crowd murmur (see here for more information). The practical upshot of this is that an actor’s voice is quite intelligible even from the top seats, without amplification.

Built in the 4th century BCE, and expanded later to seat about 14,000, the theatre is still in use today – a favorite venue of Greek theatre companies and a magnet for theatre lovers. During the Epidaurus festival held every summer, audiences enjoy a variety of ancient or modern plays as well as concerts. 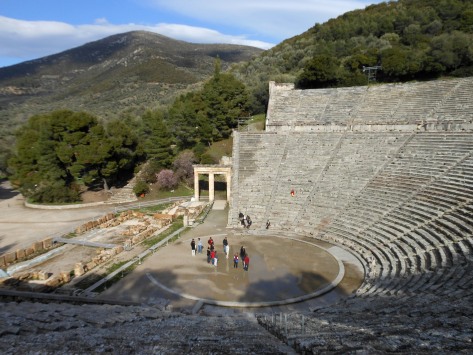