Sometime ago I had promised to solve the mystery of the cuttings on the eastern side of the Parthenon. Life intervened and delayed me for a while, but now I’m finally able to post the promised article.

Let us remember the case: the temple’s architrave (the horizontal beam right above the columns) is riddled with holes. The larger ones, 14 in all, were used to support large round shields (as evident by the weathering marks), possibly donated to the temple by Alexander the Great. The smaller ones -in 12 clusters squeezed in the gaps between the shields- remained a mystery until the late 19th century, when one dedicated archaeologist risked breaking his neck to solve the puzzle.

Part of the architrave of the eastern side of the Parthenon as it is today. Two kinds of cuts are visible: large ones, used to support one shield each, and many smaller ones, which supported the (probably gilded) bronze letters of the missing inscription. The outline of the shields is still visible today, proof that they hung there for quite a long time for erosion to have that effect.

Experts knew that these holes were probably used to support the letters of a monumental inscription, which -they hypothesized- had something to do with Alexander the Great’s donation. Other such inscriptions were known to exist in other monuments, such as the gate of Hadrian in Attaleia (see here), and the Golden Gate of Constantinople (Istanbul). Another example is the Erastus inscription in Corinth, whose letters were inset, rather than simply attached to the marble. After the letters were removed, their outlines were clearly visible, making reading it quite straightforward.

Part of the Erastus inscription near the Corinth theatre. His name can clearly be made out in the beginning of the first line.

In the case of the Parthenon inscription, things were not that easy. The only thing left on the architrave was the holes used to attach the letters. There were no weathering marks which might give us some idea of what letters might have once hung there. Whoever undertook to reconstruct the inscription would have to carefully measure and analyze the position of the holes so as to figure out what letters comprised the text – a feat not easy to attempt while hanging 13 meters (about 40 ft) above the rocky ground of the city’s highest landmark, with the wind howling all around. However, in 1896, a young student at the American School of Classical Studies in Athens, Eugene P. Andrews, made up his mind to do just that. 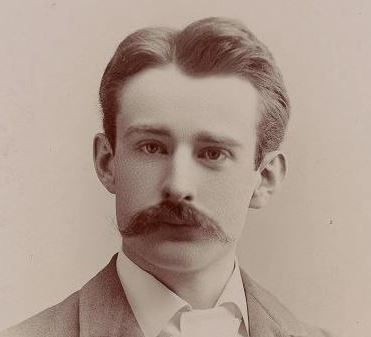 Eugene P.Andrews, at approximately the time he deciphered the missing inscription.

With few technical means and, I might add, quite a bit of courage, Andrews managed to make squeezes (a sort of paper cast) of all the groups of holes. That was the hardest part. After that, figuring out which letters the holes corresponded to was relatively easy and Andrews was able to reconstruct most of the text. He showed his findings at an open meeting of the American School

“He hung the squeezes on the walls of the School library with a piece of paper below on which the positions of the cuttings were marked. He reports that he did not lecture, but merely walked along filling in the letters. Thus the text was revealed.”

But what was the text?

The inscription was in honor of notorious emperor Nero. It reads:

in the year when Tiberius Claudius Novius son of Philinos is acting for the eighth time as general over the hoplites, overseer and lawgiver, and Paulina, daughter of Kapiton is priestess.

A drawing showing Nero’s inscription as it would have been on the Parthenon.

As you can see, the text is clearly divided in three parts: the first indicating the three bodies whose decision it was, the second mentioning the person honored (in the most flattering terms possible), while the third states the date in the usual Greek manner, by mentioning someone in office at the time (today we’d say, for instance, “in the third year of Obama’s administration,” if we hadn’t developed a standardized dating system.) The addition of the priestess of Athena seems a courtesy, because the inscription was on the goddess’s temple.

Andrews took little pleasure in his achievement: to an avid lover of ancient Greece (expecting to read something about Alexander the Great at the very least), reading an inscription about one of the most hated of Roman emperors was a disappointment indeed. He wrote “The inscription proved to be a dedication to Nero, whereat I’m much disgusted,” and never bothered with it again, leaving other scholars to finish his work.

Its meaning and historic background

They read the letters Andrews had missed, dated the inscription (in 61/2 CE, based on the officials mentioned), and proposed various theories as to what the inscription signified and why it had been put up on the city’s most prominent building.

It seems that the honor conferred to Nero was a golden wreath, probably attached on the architrave along with the inscription. Others argue that it was the temple itself that the Athenians dedicated to Nero. Whatever it was, what had the emperor done to Athens to deserve such an honor? The truth is, nothing. He was known as a philhellene (lover of Greece) and had even stated that only Greeks were able to fully appreciate his talents, but until that year he had yet to do anything for Greece, except send his agents to plunder statuary.

Portrait of Nero, made not long before the Parthenon inscription.

After being subjugated by Rome, the Greeks had shown several examples of trying to appease or flatter their rulers, sometimes in gratitude for benefactions to the city, others simply hoping to gain favorable treatment in return. It is therefore possible that the Parthenon inscription follows the same pattern: the Athenians conferred a high honor to Nero in the hope of gaining something from an emperor they regarded as favorably inclined to them. They also seem to have done so in a hurry – for reasons unknown. 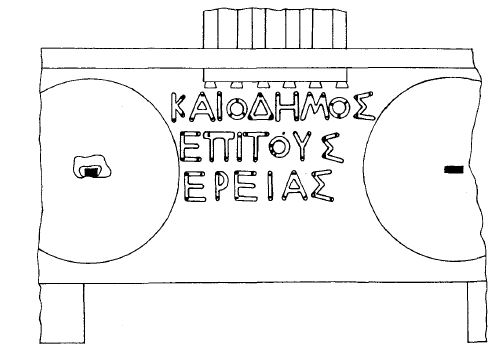 Drawing showing part of Nero’s inscription. The uneven spacing of the letters and the different means used to attach them are evidence of a hurried and haphazard work – highly untypical for an inscription of such prominence.

Did it work? Probably not. It is uncertain whether the beneficiary of this high honor was moved by the news and there is no evidence of him doing anything for Athens in any way. Even when he visited Greece, he showed no intention of seeing Athens and never did. His decree, 5 years later, freeing Greece, had no effect on Athens, which was already free.

Anyway, after his death, a “damnatio memoriae” was put in effect throughout the Empire; it meant that his memory was to be erased – his portraits removed and his name stricken from any record or monument. Thus the Parthenon inscription was taken down, only a few short years after being put up, a fact which amply explains the complete absence of weathering marks.

One comment on “The mystery of the missing inscription”