Clean Monday, celebrated a few days ago throughout Greece, marks the beginning of Lent, a 7-week-long period of strict fasting. One might expect Greeks to approach the daunting prospect of 49 days of abstinence from their favorite delicacies with regret, yet for the Greeks it is just another occasion to celebrate what they have, not mop over what they can’t have.

It is also a good occasion to celebrate spring, which is just beginning. So, every Clean Monday, Greeks flock to the countryside en masse, with kites in hand and picnic baskets full of Lenten goodies. 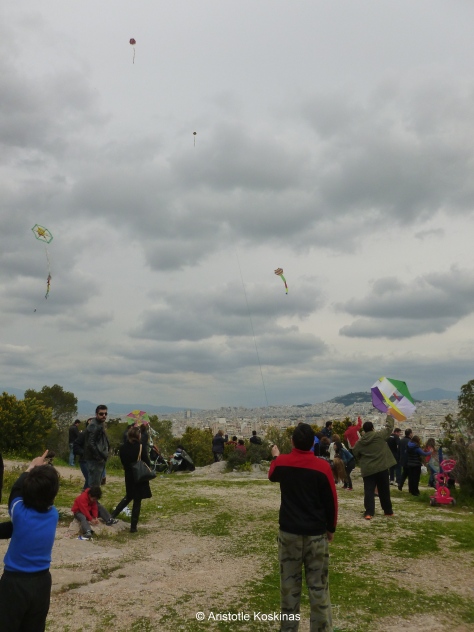 As Greeks tend to celebrate with friends and family, many cooks pool their talents producing tables (or blankets) loaded with an amazing array of delicious vegetarian dishes.

For those who stay in town, city councils organise communal events, where Lenten food is distributed to all present.

City council members and volunteers giving away Lenten food in a communal celebration of Clean Monday.

The typical dishes of the day (and Lent in general) include:

A loaf of flat lagana bread. traditionally eaten only on Clean Monday.

Hummous (on the left, with olives) and taramosalata (fish roe dip, on the right, with parsley)

The flying of kites is also an indispensable custom of Clean Monday. It is said to bring good luck and may continue throughout Lent, taking advantage of the prevailing springtime winds. Although most kites today are ready-made, some still prefer to make their own, using a reed frame, paper, glue and some strong string.

In many places, Clean Monday is torn between the austerity of the coming fast and the frivolity of the carnival which just ended. Although the table may be laden with fasting food, people may wear their costumes and may exchange dirty jokes for one last time.

Many of those customs have their roots in similar ancient rituals celebrating the beginning of the spring, whose purpose was to ward away evil and ensure a good crop. Adopted and incorporated into Christianity, they still maintain a distinct pagan feel and many archaic features. One day, when I find the time, I will attempt to describe some of them.

Small note: Clean Monday, the first day of Lent, is sometimes called Ash Monday, probably in analogy with the Catholic Ash Wednesday, when the Catholic Lent begins. However , the Orthodox rites involve no Deposition of Ashes, therefore the name is not appropriate.

3 comments on “Clean Monday: celebrating the beginning of Lent”