I’m tired of this end-of-the-world talk, aren’t you?

The end of the world has come not once but several times.

Think of it: living on an unstable planet, whose axis tilts this way and that, its continents collide, it’s volcanos erupt and storms wreak havoc, where rocks fall out of the sky – it’s a miracle we’re here at all.

If you stop to think for one more second you’ll remember the story of Noah, his family and their menagerie who survived a flood that killed all other living things. Less famous versions of the story are found across continents and cultures, which can only mean that peoples around the world have memories (albeit fuzzy and distorted ones) of events that nearly wiped them (us) off the face of the earth.

The Greek version of the events goes like this (and this will be my first post on Greek mythology, with more on the way):

Zeus, the chief of all gods was beside himself with anger at the depravity and wickedness of humans. Being quite unenthusiastic with them from the start, it didn’t take long for him to make up his mind: he’d finish with the lot of them once and for all. So, with a little help from his brother Poseidon, lord of the waters, he unleashed a storm that made hurricane Sandy look like a refreshing spring drizzle. Only the mountain tops poked out of the waters that covered the earth for nine whole days. When the waters subsided, big Z heaved a huge sigh of relief, thinking that he had seen the last of our species. But…

as soon as the waters were down the smell of a sacrificial fire invaded his nostrils. Zeus had forgotten that heavenly smell. Oh, how he had missed it during those nine days. Who were the good people who pleased him so? And –wait a minute– how had they survived the flood?

Big Z looked down from his abode on the holy mountain of Olympus and saw a couple, king Deucalion (let’s call him Deuce) of Thessaly and his wife Pyrrha. Immediately he knew what had happened. It was plainly obvious that that rascal of a Titan, Prometheus, had warned his human son and saved his life. Zeus made a mental note to deal with Prometheus later, but the humans were so insignificant and puny and the smell of their sacrifice so delicious that he decided to be nice. Besides, after nine days of wanton destruction he was in grerat spirits.

“Ask a favour,” he told his subjects magnanimously. “Any favour.”

The couple thought for a moment and decided that it wouldn’t be much of a life if no one else was around (not to mention that as kings they had to have a retinue and subjects and the like), so they asked for some more humans. Big Z frowned. Hadn’t he just tried to get rid of humans once and for all? But a promise is a promise and besides, he could always unleash another flood if they bothered him too much.

With that thought in mind, he consented to grant them their wish. He ordered them to cover their faces and start throwing “their mother’s bones” behind them. Pyrrha freaked out at the thought, but Deucalion correctly interpreted the cryptic instructions: their mother was the earth and her bones were of course the stones. They quickly began throwing stones and as soon as these landed they were turned into humans (Deuce’s into men and Pyrrha’s into women). 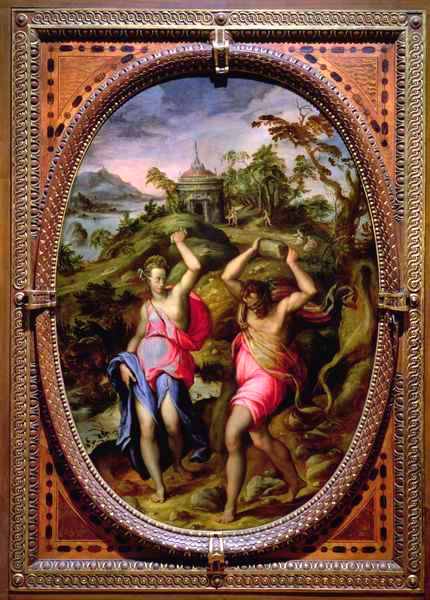 Deuce and Pyrrha, with eyes covered, throwing stones behind them. From here (see No. 6).

So they lived happily ever after and never once bothered with things like the end of the world. For them it had already come and gone.

A small note: the Greek myth doesn’t mention animals at all, except in some versions where other people are saved also, by animals who lead them to mountain tops. One has to imagine that whoever crafted the myth had a very low opinion of human intelligence, compared to that of animals.