Let’s think things through for a minute

First of all, Greece is not burning. Granted, lately demonstrations have become more frequent and they sometimes turn nasty, but this happens in one place only: the square in front of the parliament. Would you cancel your trip to the States or even New York just because of “Occupy Wall Street”?

Second, the demonstrations are true, they are happening, they can be followed by episodes and they have become a fact of daily life here in Athens. Yet here I am, an Athenian born and bred, who works downtown every day, showing people around the historic centre, and yet not once have I had any demonstration or riot trouble.

I understand that anyone who watches the news on TV, the Internet or the papers, may get the impression that the entire country (or perhaps just the entire Athens) is on fire, but it’s not like that at all.

After all, one must not forget that news agencies are in the entertainment business: the more viewers/readers they get, the more money they get from advertising. So it is only natural that they seek sensational news (and spectacular images to go along with them), even if that may mean that in the few seconds (or little space) available for a piece of news, the rest of the story gets cropped away.

An American who lives in Athens, corroborates my story: “global news channels […] are using close-in shots from the demonstrators’ very limited skirmish to depict Greece rioting against the new austerity” (quoted here).

Most people hear “riots” and think of Los Angeles, when an entire area of the city plunged into anarchy, with armed conflicts, property destroyed and lots of casualties. Things in Greece are quite different.

All riots here evolve pretty much the same way (it’s almost a ritual by now):

First, a whole lot of people gather in Syntagma square, right in front of the parliament, to protest peacefully. They hold pickets and banners and may shout slogans, in the vain hope that their elected representatives will hear the voice of their electorate (this has never happened in living memory). 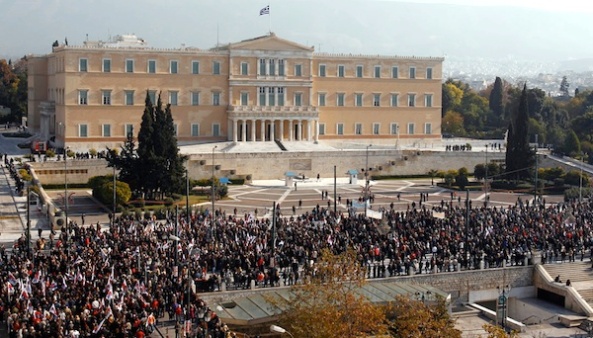 Of course, the said representatives want nothing of the sort. Instead, they give the police the order to surround the building and prevent the loud plebeians from disturbing their wise leaders.

The police cordon off the parliament but the crowd stays and may become a tad too loud or impolite. Angered by this show of disrespect, the parliamentarians order the police to shoo the crowd who are preventing them from concentrating on voting their country-saving austerity measures.

The police eagerly obey, by throwing tear gas canisters at the crowd… 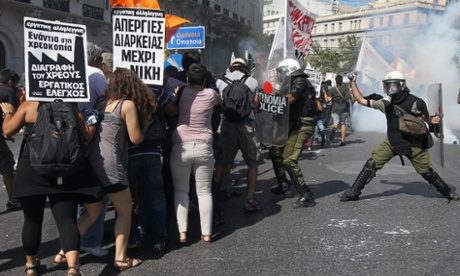 Who quickly run away. 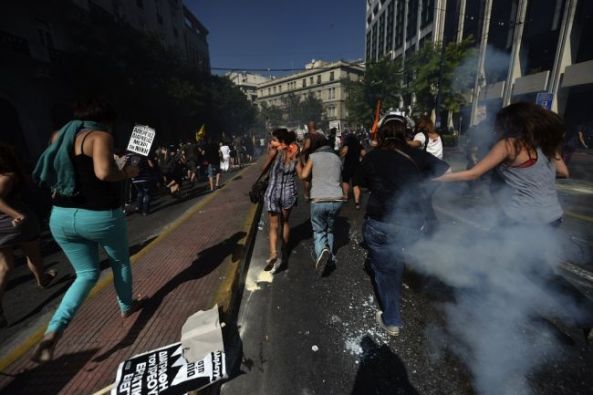 Only the most determined remain, but they too will soon  be gone, because another factor shows up: it’s a group of angry young men, who seem to be in every demonstration waiting for this very moment: they quickly put on full-face gas masks and produce empty beer bottles, petrol and rags from their backpacks. Once the Molotov cocktails are ready, they are hurled at the police.

The police see this as ample provocation to charge at the few stubborn demonstrators who have not yet disappeared, using even more teargas. Once the “civilians” are well away, the “combatants” (ie the police and rioters) may continue throwing their ammo at each other undisturbed. Since the police’s supply of teargas is inexhaustible, while the youths can always find new projectiles by breaking chunks off the pavement or adjacent buildings, the battle may well continue until the wee hours of the morning. This is the time when reporters get their most spectacular shots, of flames against the night sky. 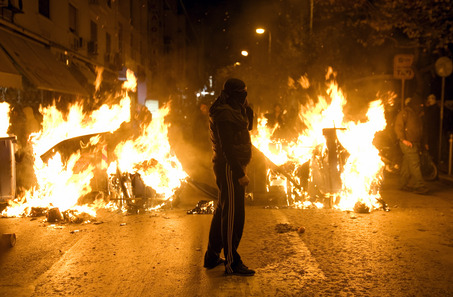 When does it all end?

By six o’ clock the next morning, the city crews may start cleaning the square from the debris and people can go about their business as usual. There may be a lingering acrid smell if the police have been too enthusiastic in their use of tear gas (they usually are), but this usually evaporates as soon as the sun is up.

As for the youths? None of them has ever been apprehended, which raises some very interesting questions about who they may be, or about the competence of Greek police, but these are not for me to answer. I’ll simply move on to describe what happens in the rest of the city, during the night when the police and rioters are busy with each other.

A few blocks away from the riots

For the rest of the Greeks, riot night is a night of anger or entertainment, depending on who they are.

Those who are political, are always angry at how the demonstration has again been hijacked by the same mask-wearing youths and how it will be discredited by all news media the next day.

Those who are not, will sit back in their sofas and get ready for a steady stream of entertainment with spectacular videos and breathless reporting that will last until well after midnight.

Those who shun the “box”, go out as usual, taking walks, chatting at cafés or sitting down at taverns in the historic district, just a few squares from the riots. The only inconvenience is that one must take a detour to avoid Syntagma square and that bus routes that cross the centre do not – of course – work.

What about the tourists?

Greece may not be a huge country, but it is certainly larger than a city square. As a prospective visitor you are faced with three options:

It is not my job to tell you which one you should choose – pick the one you feel most comfortable with. After all, it’s your vacation.

If you have already paid in advance, then think twice before wasting all that hard-earned money. If you feel the capital is too hot for you, you may want to stay in the provinces – there’s plenty to see and do in Greece besides the Acropolis.

If however you feel that the Acropolis is a must you simply can’t miss or you can’t change your plans without losing a considerable sum, then rest assured that, even in downtown Athens, the most important sites are and have always been away from centres of power and therefore have not been disturbed by riots nor clouded by teargas.

If you happen to be so “unlucky” as to be in Athens on one of the five or six days a year when there really are episodes, then steer clear of Syntagma square and the nearby blocks (see a map here). The rioters will not target you, nor will the police, but you will get a nasty lungful of smoke or teargas – or both. So play it safe and keep away from that area. You’ll miss nothing more than the changing of the Guard, which you can easily watch here. Go to the Acropolis, see the Museums and take your meals in Plaka instead of Syntagma. If in doubt, ask a local – your receptionist, a friend, your guide. They should be able to show you where to have a good time while keeping your lungs full of nothing worse than a little smog or barbecue smoke.

Now, if you worry that taking a wrong turn may accidentally put you into the path of a petrol bomb, rest assured that such a mistake is impossible, even for the most uninformed. The acrid smell of tear gas wafting from the scene is ample warning to anyone that the area should be given a wide berth.

Whatever you do, enjoy your holiday.

Once, a few years ago, on a cold winter night, I was out with a friend. We had just sat down at a nice tavern and were getting ready to order, when my wife called. “Are you all right?” she said. “Of course I’m all right,” I answered, a bit testily, wondering if recent motherhood had changed my wife into another version of my mom. “Where are you?” she asked again. “I’m in Plaka with Giorgos,” I answered, worrying whether it might be jealousy after all. “There’s rioting downtown, it’s all over the news, don’t you know it?” she asked. I didn’t. Neither of us had heard nor smelt anything out of the ordinary, as if the rioting were miles away, not a mere five minutes’ walk from where we were sitting. Yet the rioting was bad, they said, and it was all over the newspapers the next day.

Which proves my point: you can enjoy yourself in Greece oblivious of any episodes, even if they’re near.

8 comments on “Greece is burning! Should I stay away?”